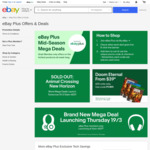 As reported on Finder

PS. Before you go and buy the $10 SD cards @ Harvey Norman, I believe there will be micro SD cards for 99 cents that haven't been mentioned in the article.