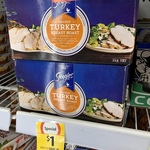 Mad prices again at Coles Campbellfield (VIC) today. Was there at 2:30pm and there was still stock of the following frozen products (pics in links). Best before dates were all into 2021, so no issues there. I think they're clearing everything for a store renovation. Unfortunately no toilet paper to be found anywhere. Get in quick. Enjoy :)