This was posted 1 year 3 months 14 days ago, and might be an out-dated deal. 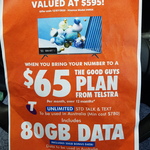 Please be kind as first time posting a deal. Came in store to collect an online order and saw this deal advertised. Ending today but got a couple of hours before store closes.

Review shows as decent tv for bedroom or if used as a second tv for home.

Not sure if it is in all stores or store specific deal please call your local TGG stores to find out.