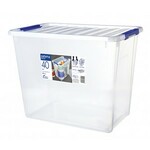 I don't know about everyone else, but after years of looking at OzBargain, I have way too much stuff!!

I was looking to buy a bunch of storage tubs to put things away in the garage and came across this special at Big W. Great price on a decent brand storage tub which brings them down to the price of an el-cheapo tub for a more premium product.

I bought about 16 tubs for about $135 and can vouch for their strength and build quality. Nice locking clips. Be aware these don't have wheels however. You can check store stock levels of each size online for your nearby stores.