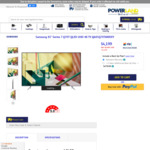 Been looking for a 80+ incher for a while came across this deal. JB Hi-Fi price matched earlier today. They are around $4500-4999 at most shops. I have 1 unique price match code (From JB) i am happy to share out to anyone that wants to buy this. Same price also on appliance central website. The link i was given for the price match expires at midnight. I am sure if you call tomorrow you should get the same response anyway.

Forgot to mention FREE delivery offered as well at JB.