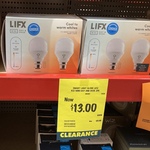 I only used it for homekit. it's super easy to link without using the Lifx app. One inconvenience is. apple home app can't save color temperature after edit. you need to install the Lifx app just to update its firmware.color temperature should be solved after firmware update.