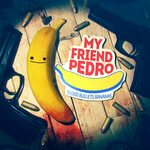 Great prices for these two games - all time lowest on the PlayStation Store.

My Friend Pedro is a violent ballet about friendship, imagination, and one man’s struggle to obliterate anyone in his path at the behest of a sentient banana. The strategic use of split aiming, slow motion, and the ol’ stylish window breach create one sensational action sequence after another in an explosive battle through the violent underworld.

Unleash a torrent of destruction with an incredible level of control over both your weapons and your body. Twist and turn through the air while aiming both hands at priority threats or line up a perfect ricochet to drop an unsuspecting gangster from behind.

Break up the high octane running and gunning a bit with dynamic sequences like a thrilling motorcycle chase or slow it all down and take a moment to think through a series of clever (and possibly fatal) physics-based puzzles.

On its 25th anniversary, rediscover this classic, consistently ranked among the best 100 games of all time! It was one of the first games to use motion capture technology for more realistic animations, with backgrounds that were entirely hand-drawn and a gripping science-fiction storyline.

In addition to the original 1993 game, this version includes a Modern mode, with:

My Friend Pedro
by Devolver Digital