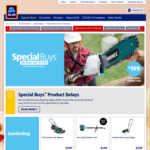 Excerpt from the upcoming Aldi catalogue. Too lazy to upload and edit the rest.