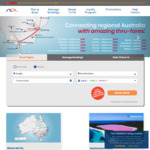 Rex has announced it’s to rapidly expand its 737 capital city network to operate twice-daily services to both Adelaide and the Gold Coast in a month’s time.

The regional carrier will commence services between Melbourne and Adelaide from 31 March, and then from the Victoria and NSW capitals to the Gold Coast on 29 March and 1 April, respectively.

Rex made the surprise announcement on the day it entered the battle for the golden triangle, with VH-RQC departing Melbourne at 7:21am as flight ZL18 and landing at 8:25am in Sydney.

Tickets are on sale now and prices are currently:

I don't think this has been posted yet. simmomelb has posted the Virgin fares that matched Rex on all of these prices, however, but I don't see an actual post for Rex.