This was posted 1 year 4 months 2 days ago, and might be an out-dated deal.

Win first place in their heart and adopt a greyhound during this year’s Greyhound Adoption Month, with $75 adoptions during April 2021.

Greyhounds are affectionate and sweet natured dogs who love human companionship. Despite their big appearance, greyhounds do not need vast amounts of space, in fact they thrive in urban spaces. They are very adaptable and equally suited to large properties, suburban homes, units and even apartments. They are low maintenance pets who enjoy a 15-20 minute walk each day, and sleep for up to 20 hours per day.

Adoptions through GAP are usually $350, but for adoption month they are discounted to $75! 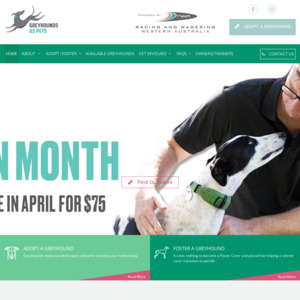 Active or upcoming Pets deals from the last 30 days.
Loading...