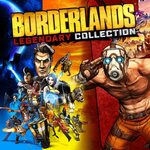 Great prices for these two collections and Space Crew - all time lowest on the PlayStation Store.
If you haven't got and played any Borderlands game yet, I cannot recommend this collection highly enough.
Serious Sam is also great if you like shooters and a bit of a challenger.

Get 3 times the mayhem, 3 times the loot, and 3 times the action with the Borderlands Legendary Collection! Kill bandits and beasts, collect powerful weaponry, and maybe even save the universe in Borderlands: Game of the Year Edition, Borderlands 2, and Borderlands: The Pre-Sequel. Packed with piles of bonus add-on content for each game, adding 100+ hours of gameplay at an incredible value*.
• Enjoy all three games cooperatively with local two-player split-screen or four-player online play
• Borderlands: Game of the Year Edition - Take on the lawless, desolate planet Pandora in pursuit of powerful alien technology rumored to be inside an ancient Vault
• Borderlands 2 - Play as one of six Vault Hunters attempting to liberate Pandora from the evil mastermind, Handsome Jack
• Borderlands: The Pre-Sequel – Visit the Pandoran moon Helios and discover the story behind Handsome Jack's rise to power
*Borderlands 2: Commander Lilith & the Fight for Sanctuary add-content sold separately

Step into the shoes of the legendary action hero Sam "Serious" Stone and experience one of the most explosive shooter game series of all time as you save the world from a merciless alien invasion. Visit the ruins of ancient Egypt and roam through the vivid arenas of South America fighting seemingly never-ending hordes of enemies using an extremely destructive arsenal including shotguns, heavy lasers, rocket launchers, a huge cannon, and an iconic minigun.

Tired of playing alone? Go to war against Mental's horde with up to 16 players online or 4 players in local co-op, blasting your way through the campaign or the stand-alone survival mode. Finally, put your skills to the test against other players in classic multiplayer modes including Deathmatch, Team Deathmatch, and more.

Captain's Log, Star Date 2159. This is Space Crew. Its continuing mission: To defend Earth and humankind, to eliminate the extraterrestrial threat and to boldly go where no Crew has gone before!

Your Space Crew Needs You! Enlist today and blast off to new heights!

The United Defense Force will allow you to set across the galaxy on a campaign to defend Earth.

It will be your responsibility to help stop all of humankind being wiped off the intergalactic stage by the mysterious extraterrestrial threat known as the Phasmids.

The U.D.F. is doing their part, are you?

Recruit YOUR Space Crew:
From captain to comms officer, weapons officer, engineer and more - you will create your own unique crew with customisable equipment, loadouts, appearances and names.

Fastest Hunk of Junk in the Galaxy:
Personalisation does not end at your crew, customise your spaceship from weapons, armour, engines, escape pods, liveries, and more to make your ship your very own.

Close Encounters of the Space Kind:
Precarious asteroid fields, harmful radiation, the freezing vacuum of space and black holes all pose a danger to even the most experienced space crew.

Guardians of the Earth:
Travel throughout the Galaxy and defeat the threat to humankind through a range of single player missions from reconnaissance to bounty hunts, reclamation and more.