[VIC] Famous Star with Cheese, The Big Carl or Western Bacon Cheeseburger for $4.99 Each at Carl's Jr

Carl's Jr is now on Australian TV (well, Melbourne at least) and I'm thinking it's their very first TVC campaign!
The television commercial promotes three of their burgers for $4.99 each.

Shame it wasn't their Original Angus Burger that IMHO is their signature burger.
Snapped an image of the promotion just before at my local store, it gave more details on the terms.

T's & C's: Victorian stores only, not conjunction with any other offer and one burger per customer per day.

Carl's Jr is not a burger clone, timeline: McDonald's founded in 1940, 1941 for Carl’s Jr. then way later, 1953 Burger King (our HJ’s).
Carl's Jr burgers are 'chargrilled', unlike HJ's 'flamegrilled'.
The burgers are BETTER at Carl's. Try the Angus burger range and taste for yourself.
I DO NOT WORK OR AM ASSOCIATED IN ANYWAY to Carl's Jr. other than being a fan. 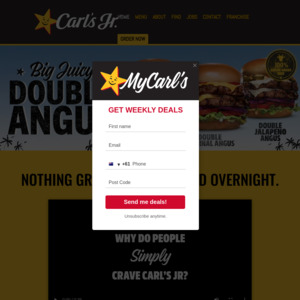