This was posted 10 months 8 days ago, and might be an out-dated deal. 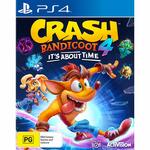 It’s About Time - for a brand-wumping new Crash Bandicoot game!

Crash fourward into a time shattered adventure with your favourite marsupials. Neo Cortex and N. Tropy are back at it again and launching an all-out assault on not just this universe, but the entire multiverse! Crash and Coco are here to save the day by reuniting the four Quantum Masks and bending the rules of reality. New abilities? Check. More playable characters? Yep. Alternate dimensions? Obviously. Ridonkulous bosses? For sure. Same awesome sauce? You bet your sweet jorts. Wait, are they actually jorts? Not in this universe!

You are the God's last hope

Play as Fenyx, a new winged demigod, on a quest to save the Greek gods and their home from a dark curse. Take on mythological beasts, master the legendary powers of the gods, and defeat Typhon, the deadliest Titan in Greek mythology, in an epic fight for the ages.

Immortals Fenyx Rising is a fresh and witty take on the open-world action-adventure genre, featuring dynamic action, combat and stories inspired by Greek mythology. Roam freely across a beautifully stylised world and use extraordinary abilities gifted by the gods against fearsome mythological monsters. Treacherous trials, heroic feats and the very underworld itself await your bravery. Experience a tale for the ages, of gods and monsters, and become the legend you were destined to be.

Crash Bandicoot 4: It's About Time
by Activision
Immortals Fenyx Rising
by Ubisoft