This was posted 5 months 24 days ago, and might be an out-dated deal. 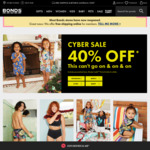 Stack with 20% cashback (22% with Max) @ Cashrewards from midnight