This was posted 6 months 18 days ago, and might be an out-dated deal. 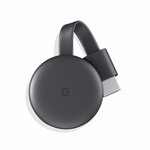 Description
Google Chromecast allows you to easily and wirelessly stream your favourite entertainment from your mobile devices straight to your TV. It works with your existing smartphone, tablet or laptop and a variety of compatible apps so you can quickly and easily enjoy it all on the big screen.

Features & details
The Chromecast connects to your TV via the inbuilt HDMI port
It is powered via the included AC adaptor
It utilises your existing home WiFi network to wirelessly connect to the internet and your devices
Chromecast is compatible with over 2,000 apps
You can mirror your Android device or your Chrome browser directly on your TV