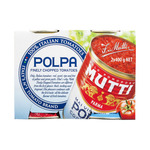 One of the best canned tomatoes. Made in Italy. Ferrari, Fiat.