This was posted 6 years 7 months 19 days ago, and might be an out-dated deal. 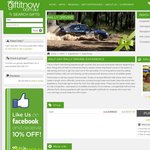 This might be my favourite thing on our site. It's a half day rally experience that includes 18 laps of numerous tracks on some of the best gravel in Perth. These guys know rally, their course is built specifically for rally and they regularly run motorsport on their stage. Starting off small, drivers will get the feel for two Subaru WRX STI and Liberty RS rally cars before moving up to tackle more difficult tracks.

Finally they'll have the chance to drive a couple of laps of the 2.7km rally stage to really flex their foot muscles. It's awesome - I promise you.

We’ll begin at 9:00am with an interactive theory session, during which time we’ll introduce you to the safety, the how and the why of Rally Driving. Once you’ve gained the rally basics, it’s straight to the Group A Subaru Rally Cars where we’ll strap you in behind the wheel to put it all into practice. Soon you’ll be sliding sideways on our purpose built tracks, enjoying the Turbo Charged power and unmistakable exhaust note that only a Subaru rally car brings to the Forest! Near the end of the session we’ll swap seats with you. This time you’ll be in the navigator’s seat as we take you for an adrenalin packed sideways hot lap around our rally stage.