This was posted 8 years 7 months 18 days ago, and might be an out-dated deal. 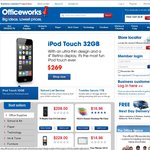 update 28/12/2013
according to the comments below,
Elizabth St store doesn't have stock any longer, you might want to ring your local store to check.

on Tuesday, happened to see this deal on the counter in officeworks store on Elizabeth St store.
Bought one.
It's said to be locked to vodafone, but I unlocked it via below link for free:

Brand New.Came with a Vodafone prepaid sim card(free).
Upgrade it to IOS 6.13 via itune.
8G storage space might not be enough for nowadays, but good price to have it as a backup phone.

When I bought it, they had a few stock left.
Had issue with my computer, just fixed it today, sorry for sharing it late,
but I would suggest you to ring them first to check if they have stock now.
(no url online, in store only i think)