This was posted 7 years 10 months 2 days ago, and might be an out-dated deal. 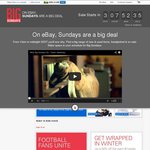 Since Video Games and Consoles are mentioned, I think PS4 and Xbox One are included. However I am not 100% sure.

Update 2 : You might want to check out Kogan Ebay store. They are selling phones & tablets(including iphones and Galaxy S5) under Toy section, so the 20% discount should be applied to those phones & tablets. Plus, it seems like Kogan listed Xbox One on their store as well, but it is same price as what DSE is selling at the moment($498, after the discout $398.4 thanks arena sales).

Update 4 : Many mobile phones, talbets and consoles that are sold by Kogan are no longer listed under the "toy" section. Make sure what you are purchasing is under the right category, so the discount can be applied.

Udpate 8 : Some ipad are still under Toy section(thanks andri77), including ipad mini with retina 16GB white which should be $352 (after disc)

Update 9 : Some Samsung smartphones(including Galaxy S5) are still listed under the toy section.

However, I can not confirm the 20% discount can be applied to those smartphones, tablets and consoles that are sold by Kogan