This was posted 5 years 4 months 30 days ago, and might be an out-dated deal. 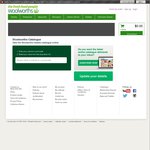 Thanks so much to imissbeans for the photos for these deals. Not sure if toilet paper has been this cheap per roll before? Starts Wednesday.