Whilst visiting family, a St Marys Pizza Hut delivery driver backed out of a neighbouring property and into my stationery parked vehicle. He sped off without stopping, drawing the attention of three eyewitnesses who came and reported this to the house I was visiting.

After establishing via the neighbour whose driveway he was exiting, that the Blue Pulsar in question belonged to a Pizza Hut delivery driver who had just delivered pizza to the house, I called the store and told them that one of its drivers was just witnessed colliding with a stationery vehicle and fleeing the scene, and was asked to come to the shop to report the accident.

Long story short, after getting to the store and seeing an exact match for the car eyewitnesses described, complete with damage to the rear-left panel and a smearing of my car paint on it, the Not-A-Manager's-A$$hole in charge queried his driver, who denied it, and basically said there is nothing I can do. He elaborated that drivers were contractors, not employees and that despite the damage to both vehicles, the order sheet which put the driver at the scene of the accident and the accounts of three independent eyewitnesses, that it was my word against his and not Pizza Hut's responsibility.

I insisted that police were called and they attended a couple hours later, and despite telling the driver that it was pretty obvious he had done it given the physical evidence (and that any formal statements they could obtain from the witnesses would be pretty damning evidence if required in court) he stuck to his guns despite admitting the car was not insured and eventually refused to co-operate further with police until he could speak with legal aid. Clearly, we're dealing with a fine upstanding citizen here of strong moral fibre.

Police said given the likelihood he was driver, they could get him to provide details which I could provide to my insurer so they could fit the bill, although if I wanted to hold him accountable, they'd first need to speak with the witnesses (whose details I provided) after which time he'd be hit with a number of infringements including failure to stop and exchange details after an accident. Anyhow, I understand pursuing the matter will not be the police's highest priority and a week later, I'm waiting to hear what happens next. But it is now, my highest priority. I've got a thing for natural justice and refuse to stand idly by and let this grub who's been caught red handed weasel out of responsibility and potentially continue fleeing further accidents.

Pizza Hut have thus far failed to respond to my correspondence. I've already wasted hours of my life dealing with this fat, cowardly grub and his employer who refuses to entertain any discussion since "he's just a contractor". In the meantime, I'm left with a vehicle with a couple thousand dollars damage and which will require time and inconvenience to be repaired, presumably at my expense.

If anyone has any suggestions on how to compel an outcome out of police, the driver or Pizza Hut, I'd love to hear them. Extra points for creativity… 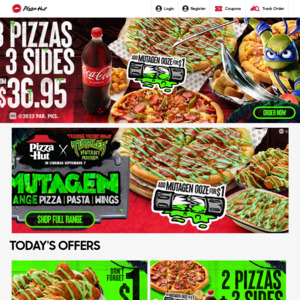