This was posted 4 years 8 months 10 days ago, and might be an out-dated deal. 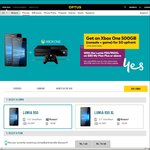 Last year's deal is back again. Subscribers taking up Lumia 950 and Lumia 950XL plans starting at $80 per month are eligible for a free 500GB Xbox One console & game. Minimum cost is $1920 over 24 months.