This was posted 4 years 24 days ago, and might be an out-dated deal. 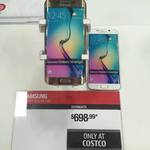 Was passing by the vodafone mobile kiosk in Costco today and came across this. Very very good deal IMO as Harvey Norman has it for 888, JB for around 798 and even Kogan has it for 798. Costco membership is required. They have around 10-12 in stock all in either gold or white. Comes with 2 years Samsung warranty and is unlocked so can be used with any carrier. Great deal!