This was posted 4 years 9 months 7 days ago, and might be an out-dated deal. 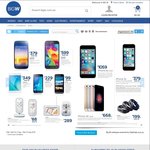 Credit to Rggmcl for mentioning this deal in this post.

Note that Telstra has done the same phone for $359 in that above post the past two Tuesday nights - and may continue to for the coming Tuesday night,