This was posted 3 years 7 months 9 days ago, and might be an out-dated deal. 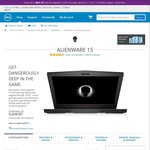 Dell has started a sale on 6th gen cpu pascal alienwares since 7th gen is taking over.
Kaby lake cpus are almost identical to last gen Sky lake so I thought this would be a great buy for anyone looking for a high end gaming laptop.