This was posted 3 years 7 months 27 days ago, and might be an out-dated deal. 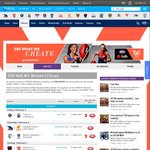 All matches for the 2017 NAB AFL Women's competition are FREE ENTRY with the exception of some Double Header matches. Entry is subject to capacity.

Competition is held over 7 weekends in February and March at venues in Sydney, Melbourne, Brisbane, Perth, Adelaide, Canberra and Darwin. Here are links with details of all the games at each venue…

Selected matches are also being broadcast on free-to-air TV. Check out the broadcast guide here.