This was posted 4 years ago, and might be an out-dated deal. 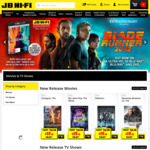 Just randomly checked their website and JBHIFI seems to be having a sneaky 20% off Blu Ray and DVD sale. Great time to use up those extra 20% off STACK coupons.