This was posted 2 years 11 months 2 days ago, and might be an out-dated deal. 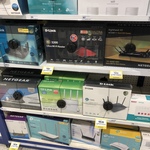 Was in Officeworks Dubbo and it looks like they are clearing out a bit of gear. Routers were heavily discounted some from almost $500 down to under $200. I don’t know how good they are but maybe useful for someone.

This deal has been seen at multiple Officeworks locations. Check with the stores to verify stock.