This was posted 2 years 9 months 18 days ago, and might be an out-dated deal. 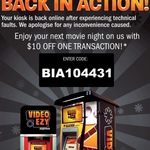 Received this email with a $10 off code for Video Ezy kiosks.