This was posted 3 years 2 months 6 days ago, and might be an out-dated deal. 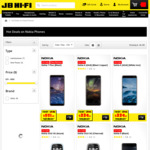 Looks like a good deal for anyone after local stock for the new 2018 models with Android One (excludes the Nokia 8 Scirocco). Ends Sunday 03/06.