This was posted 3 years 1 month 16 days ago, and might be an out-dated deal.

Due to the overwhelming positive response we got last month from our O2 Deal you can find here.

We've decided to launch another 50% off sale due to the demand being quite high this time around the year.

Im sure every ozbargianer is aware that Summer has now hit Europe and apart from the temperatures rising, demand is also rising just as fast - if not ** faster **.

Now is the BEST TIME to purchase a Euro Travel SIM from us before your Euro Trip because you can now snag these Sims at 50% off which is even cheaper than buying it here directly from Australia instead of having to go the UK and purchase the O2 SIM for yourself!

Now without any further delay heres the deal:

How to activate the SIM

Destinations The SIM works In:

Our 100% Money Back Guarantee:

if for any reason you land in any of the European destinations mentioned and the SIM does not work or activate we will refund your
full purchase price for the SIM cards - Guaranteed.

You can check out securely through PayPal, Master Card , Visa, AMEX, ect 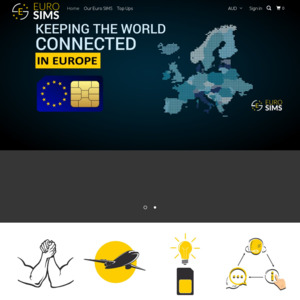