This was posted 3 years 10 months 10 days ago, and might be an out-dated deal. 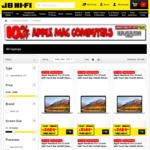 The new Macbook Pros are available at 10% discount at JBHIFI.
That was quick … they got only released this week!