This was posted 2 years 6 months 23 days ago, and might be an out-dated deal. 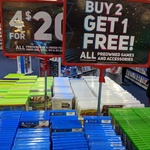 Saw this today and thought it was worth posting.

Title speaks for itself, all preowned games (Xbox One/PS4 games shown in picture)