This was posted 1 year 5 months 13 days ago, and might be an out-dated deal. 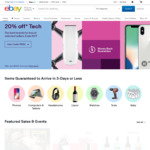 Targeted eBay sitewide sale. Check back at 10am Monday to see if you're selected. Full T&Cs here. Good luck :)