This was posted 1 year 11 months 3 days ago, and might be an out-dated deal. 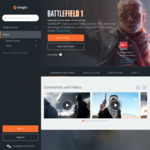 Thanks to SpaceGhost for the info that the Premium Pass is also currently free for BF1.