This was posted 3 years 2 months 1 day ago, and might be an out-dated deal. 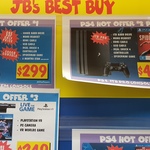 Staff was putting this out before JB hifi closed earlier. The controllers will be 49.first time posting, please be kind :)