This was posted 2 years 7 months 18 days ago, and might be an out-dated deal. 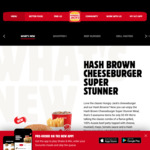 Went to Hungry Jacks today and thought I'd do something stupid. They have this new stunner deal called the 'Hungry Jacks Hash Brown Cheeseburger Super Stunner'

For $5.95 it includes a Cheeseburger with a hash brown in it, a small coke, a small chips, three nuggets and a drumstick mini.

You're probably wondering why you're reading this…

Just thought people would like to know about this little hack. Keep in mind it's only really worth it if you have another person or two to share with. I ordered this once and ONCE only… promptly went home then crashed for the next four hours from a food coma! Great value if you were already with someone who was going to order one of the products involved and wanted to pay full price.

TL;DR Some moron worked out a way to get expensive items from Hungry Jacks cheap with way too many kj's