This was posted 2 years 6 months 22 days ago, and might be an out-dated deal. 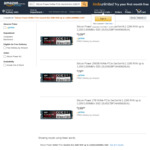 Super-fast PCIe Gen3x4 interface for read/write speeds of up to 3,200MB/s / 3,000MB/s
NVMe 1.3 support
RAID engine for enhanced data integrity
Slim form factor M.2 2280 (80mm) for perfect fit in slim and portable mobile applications or desktop PCs
To support a Silicon Power PCIe SSD, the system must have an M.2 connector with only an M key. The Silicon Power PCIe SSD does not have a B notch and therefore, the B key on the SSD connector will prevent it from being inserted.