This was posted 2 years 6 months 6 days ago, and might be an out-dated deal. 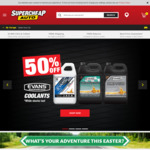 Just received this deal by email.

*20-60% off storewide available in store and online 20th April, 2019 or unless sold out. Store Stock Only. While stocks last.

All savings stated are off the full retail price. 20% off special orders available in store and online 20th April, 2019 or unless sold out. Excludes gift cards, tyres, services & shipping & handling charges. Illustrations, photos and packaging are only a representation of the products advertised - variations may occur from store to store. All products were available at the time of send. Supercheap Auto will not be responsible for the lack of stock due to supplier problems and reserves the right to limit purchases to normal retail quantities. Rainchecks not available.