This was posted 1 year 3 months 12 days ago, and might be an out-dated deal. 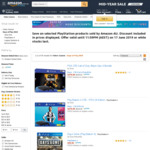 Plenty of deals available, similar to the Big W deal.