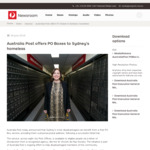 Obviously Targeted and not for everyone but a great initiative. Get a free PO Box with Mail2Day service in select Sydney locations if you’re homeless or doing it tough. I’m sure more details will be on the Australia Post site shortly.

The new service will be offered at the following Australia Post branches.

Mod: Node marked as Long Expiry, deemed not suitable for future re-posting (even after 6 months).