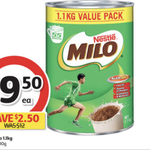 Same unit price at Woolworths thanks to sarahlee2201. And posted here.

Is over 1kg too much? Nah, Milo is much more than a drink. Get cooking and try Milo marshmallows.

Is it just for kids? Nah, try a Milo Martini or a Bourbon Milo milkshake.

Don't forget to use discounted gift cards and cash back (if online).