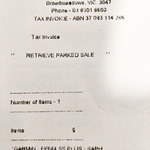 Item is no longer on JB's website as new Fenix 6 models has replace this watch.
If you use the item number(313693) instore they still sell it.

VERY LIMITED STOCK and in some cases the store is selling ex-demo models. I would STRONGLY suggest confirming stock with your local store before popping in.

Really good price if you are looking at grabbing a Garmin Fenix, especially for the Sapphire edition.

Don't forget to stack with GC to get an additional %5 off.

Garmin Fenix 5s Plus
by Garmin