How To: Personalise your OzBargain front page/new deals page to see more relevant deals (and less irrelevant ones)

This short explainer is intended for users who are new to Ozbargain (or just anyone in general) who needs a quick reminder on how to use Ozbargain's new front page algorithms and the new user preferences that can be used to refine what deals are shown on your front page/new deals page, plus a few extra tips on how to use it to filter out deals you don't want to see.

Many of the settings we'll explore requires you to be using the new front page algorithm. Navigate to Ozbargain.com.au, click the three-dot icon (…) near the top right, then tap the 📝 New button shown in the list. Front page filtering will ONLY work if you set this to new. 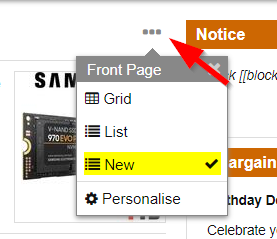 Right next to the new button is the "⚙️ Personalise" button, which will bring you to the settings menu. 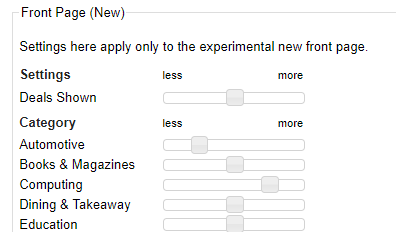 Category sliders allow you to promote or demote deals belonging to a certain category. For example: You don't play video games, and you'd like to see less gaming deals in general. You can move the slider all the way to the left to greatly reduce the amount of gaming deals. At the same time, if you want to see more deals for a holiday package or a romantic dinner date, you can push the sliders on "Dining" and "Travel" all the way to the right. 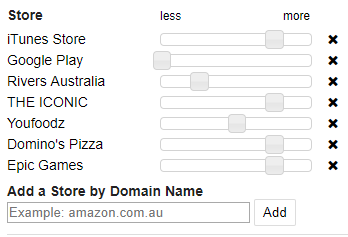 Store: You can also promote or demote deals by store domains. To enter a store domain, you'll first need to first type in the domain name of the store (omitting https:// or www) and wait a second — the system will display the matching store(s) in a drop down menu.

Take note that some marketplaces, such as amazon and eBay have different domains (e.g Amazon.de , Amazon.com.au are considered two different stores)

Example: you have an iPhone but you don't use Android devices, and find Google Play apps irrelevant to you. Simply type play.google.com, wait a second then click the 'Google Play store' entry and add it as a customisation slider.

You might already have noticed certain deal titles have certain keywords wrapped inside [square brackets]. These are called title tags or title flairs, and not only does it convey important meta-data / information about the deal, it also provides a way for users to filter deals based on what's in these tags.

Common use case: You live in NSW and don't want to see VIC related deals — simply add VIC as a tag and it'll appear as a custom slider that you can demote.

The Ozbargain New deals page, as it's name suggests simply shows you a list of deals that have been newly submitted, in chronological order and with none of the algorithms / custom filters applied. The highlighted setting here can be enabled to show / hide deals posted by Associated persons. You may want to enable this if you only wish to see deals 'discovered' by non-associated persons but you could also miss out on potentially good deals posted by merchants themselves.

The minimum vote slider is set to "Disabled" by default, meaning you'll see every deal posted regardless of it's vote count, including deals that are voted negatively. Override its setting to hide deals that don't meet a specified vote threshold.

Under every deal is a hide button. Click it to expand this menu.

If you wish to filter out deals posted by a specific user or a store domain, clicking the options can hide them completely from your front page (but not New or Live feeds)

To filter out deals that show an excessive amount of skin and so you don't get strange looks while browsing Ozbargain at work, you can also opt into hiding NSFW deals.

Hiding deals that have expired or are out of stock

Feeling overwhelmed with the large volume of deals on big shopping days like Black Friday or Cyber Monday? Use the highlighted setting to hide expired deals from your front page so that you'll have a easier time browsing through the active deals.

Note: These settings work on both the "old" and "new" front page algorithms. They do not affect the "New Deals" page. Update (14/2/20): Now applies to new deals page.

Hide deals from the New Deals page by tag.

As of September 2020, Users now have the ability to hide deals with particular tags from showing on the new deals page.

Example: If you want to hide deals tagged as 'pizza', click on the 'pizza tag' below a deal post. Click the tag menu, click the checkbox 'Hide on New Deals page'. You will no longer see any deal with the pizza tag on the new deals page.