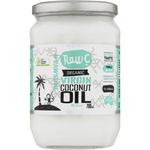 We cold press the finest, purest coconut flesh to produce the rawsome goodness of our Coconut Oil. Triple filtered, unrefined and absolutely no additives, this versatile oil is raw and certified organic. Solid at room temperature, Raw C Coconut Oil has a subtle coconut flavour and a high smoke point that makes it ideal for cooking. From savoury dishes such as stir-fries and curries, to baking, desserts and raw treats such as bliss balls and cheesecakes – it’s the perfect pure, natural addition to any kitchen cupboard.