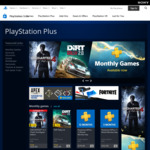 PlayStation will round out Drake's story by offering Uncharted 4: A Thief's End for free in April. Uncharted 4 is joined by Dirt Rally 2.0, an off-road racing game that released in 2019. Both games will be free to keep as long as you maintain an active PS Plus subscription.

Dirt Rally 2.0
by Codemasters
Uncharted 4: A Thief's End
by Sony