This was posted 3 months 21 days ago, and might be an out-dated deal.

Further to our current fire sale, previous post linked below, have put up a final sale coupon code that'll take down the price to $9.99/ 8 pack and $14.99/ 12 pack for our high protein cold-pressed juice.

As we still have stock remaining of the current batch, this is to clear out that remainder to make room for the new incoming stock.

Being a Brisbane-based company, currently we'll only be able to ship to the greater Brisbane area unfortunately, but have thrown in free shipping for those areas as well.

Usual RRP of $3.99 / bottle in stores, selling now at below cost due to excess stock cause by closures of stores / cafes / gyms that were otherwise stocking our products over the last few months. 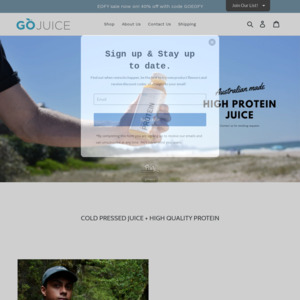