This was posted 1 year 11 months 13 days ago, and might be an out-dated deal. 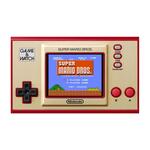 Can also stack with $10 off $39 Spend (Excludes Third Party Sellers) for First Time App Users @ Amazon AU thanks to Hamza.

Here's a blast from the past! Game & Watch: Super Mario Bros. arrives in stores on November 13th.