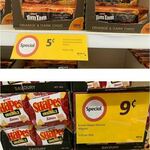 Short-dated - Tim Tams best before 18 October, Shapes 25 October. But I ate them, nothing wrong, good and crunchy.

Plenty of stock - I've got just a few, and there were boxes and boxes of this stuff left. They're located at the far end of snacks isle.