These popular items are back & #1 Best seller. Thanks to OverBought
These 3 options are in offer. Enjoy :)

I believe, you can use ZIP Pay to get extra 10% cashback (Thanks to doweyy) OR $15 Zip Credit (Thanks to JHoliday)

1.[Powerful and Reliable] - It provide instant current, without the need for a donor vehicle. You can start your vehicles (up to 10.0L Gas or 7.0L diesel), Motorcycles, RV, tractor, light-duty trucks, mower, cargo vans, ATVs, snowmobiles, oil boat, yachting in just a few minutes.
2. [Power Delivery 15W Type C Input and Output]: Supports USB type-C charging (5V/3A); you can use it to charge your other devices or charge the jump starter itself.
3. [Quick Charging Output]: The Quick Charge 3.0 USB ports can be used to charge virtually any USB powered device at lightning speed, such as smartphones, tablets, GPS, camera, kindle and more.
4. [Advanced Safety Technology]: The intelligent jumper clamp combined with 8 protections including over-current protection, overload protection, over-voltage protection, over-charge protection, making it totally safe for anyone to use.
5. [What You Get]: GOOLOO Heavy-Duty Jump Starter, 12V Battery Clamp, Wall Charger (With UL Certification),USB-C Cable, Type-C to Type-C Cable, Storage Case, User Manual. Our 12 + 6 month extended warranty & 30 days money back and 24/7 friendly customer service. This is the best gift for mom. 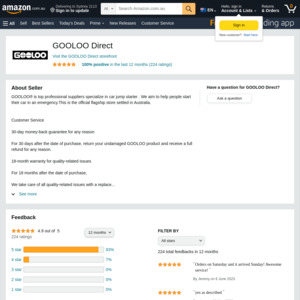